Taita Taveta Wildlife Conservancies Association (TTWCA), in partnership with UNDP and the Ministry of Tourism and Wildlife, is implementing the IWT-Kenya project aimed at reducing Illegal Wildlife Trade.

The project, which seeks to combat poaching and illegal wildlife trafficking in Kenya, is steered by an integrated approach focused on four main objectives. These are: strengthening national and local capacity for effective IWT control in Kenya, reducing poaching and IWT in threatened species, strengthening community wildlife conservancies and gender mainstreaming while conserving the Tsavo landscape.

Project activities include: training of the rangers, purchase of motorbikes, the initiation of a plan for the development of the Tsavo Ecosystem Management Plan and the Construction of the Wildlife Multi-Agency Security Hub at Kasigau Conservancy to boost wildlife security within the Tsavo landscape.

To mark the end of a three-month community rangers training, TTWCA celebrated the Tsavo landscape rangers in a pass-out ceremony in May 2022 conducted at the Kenya Wildlife Service Law Enforcement Academy, Manyani. Drawn from three TTWCA conservancies—Kasigau Conservancy, Wushumbu Conservancy and Mbale Conservancy—they went through rigorous training on topics such as: paramilitary and intelligence skills, bushcraft, disaster management, first aid skills and radio communication, all of which helped prepare them to execute their roles in a skillful and determined way given the nature of their work.

The event was attended by various dignitaries, including the Principal Secretary, Ministry of Tourism and Wildlife, Director-General of Kenya Wildlife Service (KWS) and representatives from African Wildlife Foundation (AWF) and World Wide Fund for Nature–Kenya (WWF-Kenya) WWF-Kenya. It was presided over by the Cabinet Secretary Ministry of Tourism and Wildlife Najib Balala, who acknowledged the cruciality of conservation to the tourism sector.

“Tourism is one of Kenya’s major foreign currency earners, hence there is a need to protect this sector. I encourage such partnered efforts since it’s through such that we will be able to realize maximum benefits from it,” Balala said.

Illegal wildlife trade and poaching is an aspect that has proved to be a challenge and a threat to the tourism sector for decades. So this project comes in handy to address the adverse effects that IWT has had on Kenyan’s tourism sector.

With the project also being implemented in other landscapes as well, a total of 68 community rangers were trained. This had a notable representation of 20 trainees (four women and 16 men), and representation of conservancies/ranches rangers: five from Mbale Ranch, seven from Kasigau Ranch Wildlife Conservancy and eight from Wushumbu Conservancy while the rest were drawn from other landscapes including Maasai Mara Landscape.

“Self-discipline facilitates goals and keeps our attitude elevated. You can even say that discipline is the foundation of happiness and the utmost requirement for success,” said Eunice Warighe from Kasigau Conservancy. Eunice was enthroned the best all-round trainee award after topping all the categories examined by the trainers.

With the training, the rangers are well prepared and ready to serve as conservation ambassadors and protect the rangelands in collaboration with KWS in the Tsavo Conservation Area. A total of six motorbikes were also provided to the rangers, two for each conservancy/ranch (Kasigau, Wushumbu and Mbale) to aid in maneuvering the landscape, which is a challenge to the rangers due to its vast size of about 1 million acres.

As part of the project, establishment of the multi-agency security hub at Kasigau is in its initial development stages. This will inform the engagement of a rangeland security officer employed by TTWCA to oversee and coordinate these rangers from a central point. It will be a center with various facilities, such as radio, operation and treatment rooms, among other crucial amenities. 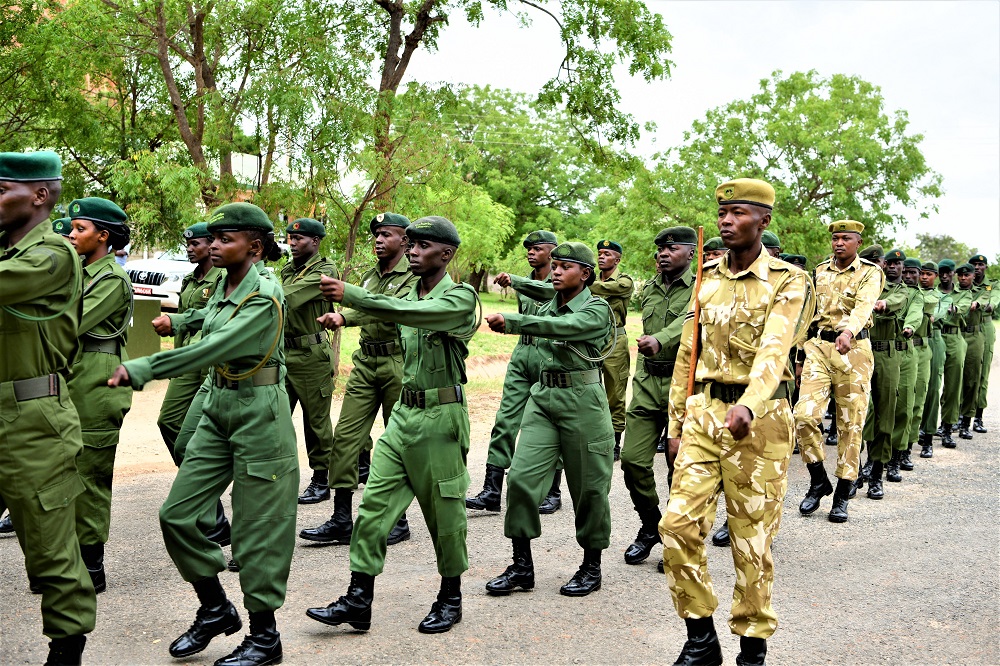